The site is located on Bãi Ông – Lao Island in the Chàm Island cluster, 15km from mainland and about 19km East-Northeast from Hội An ancient town.
When the site was discovered in May 1999, a trench of 4m 2 was excavated and expanded into a 16m 2 area in June 2000. On the ground surface, there were many artifacts dating back to the 17 th -18 th century. A 120cm deep cultural layer was divided into two parts:
– The 1 st cultural layer: 00-40cm in depth, with ceramics dating back to the 8 th – 10 th century.
– The 2 nd cultural layer: 50-120cm in depth, with a dense distribution of ceramics clusters and a lot of pebbles interspersed between them; polishedstone tools (shoulder axe, four – angle axe, axe blade, etc), pebble tools (anvils stone, pestle, smashed, crushed, pottery tool, etc) and boned needles, fish bones, fish teeth, seeds, coals, etc. The ceramics made from raw materials, a lot of sand and small stones were fragile. They were allfragments of pots and pottery fruit trays (with high or low bases). The ceramics body was decorated with patterns of ropes (rough, smooth) and many patterns of wolf’s teeth and triangles interleaved between S-shaped letters were drawn on the jar brims. According to radiocarbon dating, this site dated back to 3100 ± 60BP.

There is a 40-50cm deep Infertility layer between two cultural layers with bright yellow sand and iron oxides in some places. 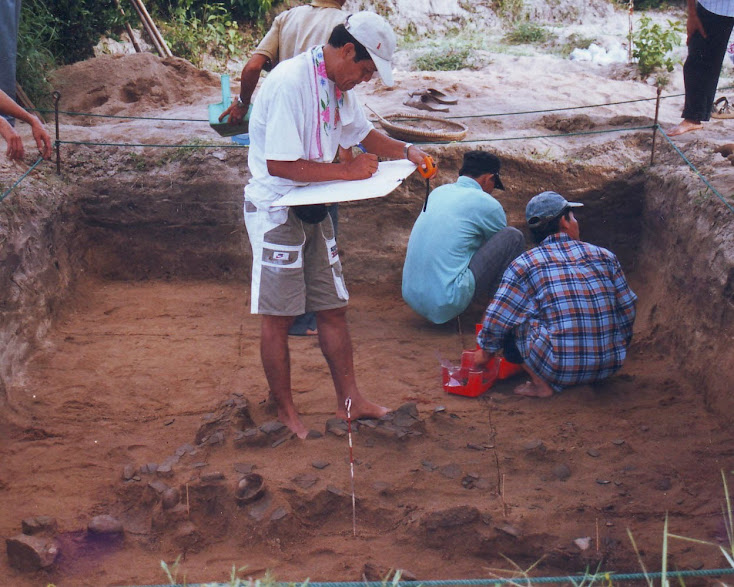 The site belonged to the island’s inhabitants in Prehistoric period (or “Pre – Sa Huỳnh period”). The findings from the archaeological excavation have made contribution to clarify many matters of the transition from “Pre-Sa Huỳnh period” to “Sa Huỳnh period” in the Central Việt Nam which received concerns from many scientists. Simultaneously, it has made an important contribution to research on Prehistory in South East Asia in general and particularly in Việt Nam.
The site was inscribed on the Provincial Relics list in 2006.
* THE CEMETERY SITE OF AN BANG:

Burial jars found at the site of An Bang

Although they were buried closely, the touch – lines of the burial jars were in the conscious stage (the latter jars did not damage the former ones). The thick layers of ashes and coals around some burial jars and especially the white fine sand in the touch – lines showed some matters relating to the funeral custom of Sa Huỳnh inhabitants.

The C14 dating shows that this site dated back to 2.26090 BP (according to the test result in Japan).

Based on a rather thick density of burial jars distributed at a convenient location along the old stream, this site is considered a large-scale concentrated cemetery of Sa Huỳnh inhabitants in Hội An.

The site was inscribed on the Provincial Relics list in 2005.

Especially, the researchers discovered two burial jars, one of them was put in another big one. The resin was used to stick the lid on jar’s brim and the evidence showing the impact of fire on the outside surfaces of jars was discovered. Some jars were found with either a charcoal layer (10-30cm thick) or a laterite layer at the bottom. Moreover, some jars also contained bones, teeth of humans and animals.

The C14 dating shows that this site dated back to 2.04060 BP (according to the test result in Britain).

Hậu Xá II is the inhabitants’ cemetery site which supplies a lot of important scientific information, especially the funeral custom in the late Sa Huỳnh period.

The site was inscribed on the Provincial Relics list in 2008. 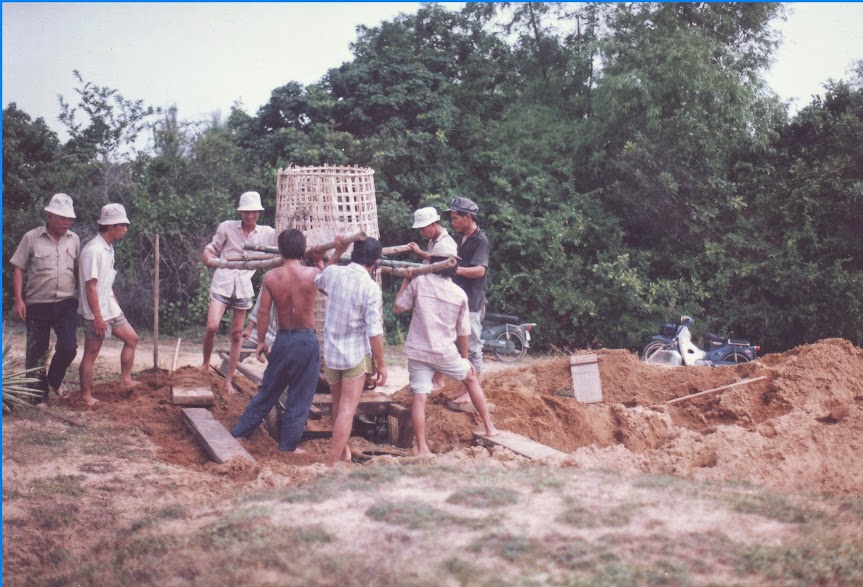 Moving a burial jar out of the excavation pit

* THE CEMETERY AND HABITATION SITES AT HẬU XÁ IHậu Xá I (15o53’05” latitudes North; 108o19’01” longitudes East) is situated at the Eastern end of the large sand dune (about 5km long) spreading from Điện Bàn to Hội An and running along the Northern bank of an ancient stream which is completely silted up. The stream is called Rọc Gốm (Ceramics Stream) by local residents.

The cemetery and habitation sites at Hậu Xá I were discovered in July 1989 and were continuously excavated in February 1993, August 1993, and January 1994. 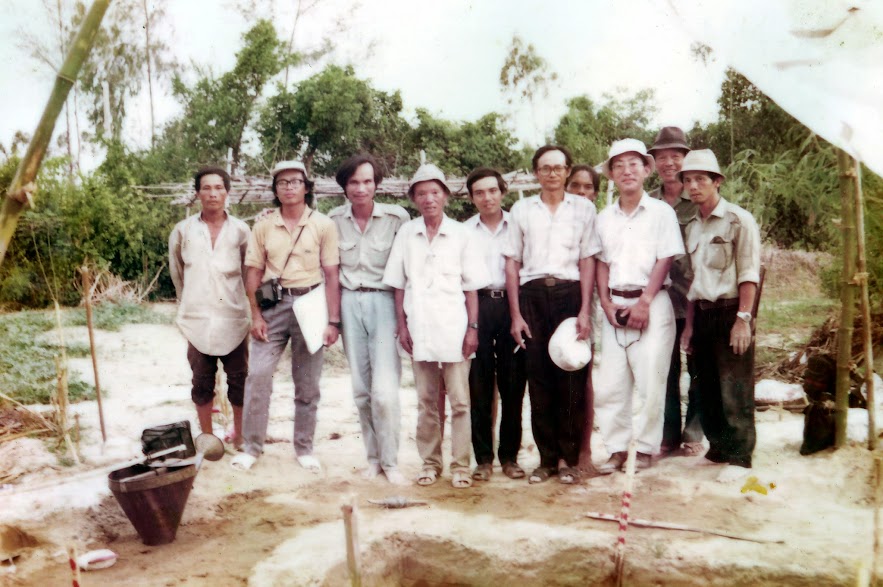 Excavation group of the archaeological site Hậu Xá I

The cemetery site: The thirty burial jars were discovered in the 4 trenches with a total area of 42.5m2, the cultural layers of these trenches were mainly excavated and in a great disorder due to many reasons. The ceramic artifacts were mainly used household tools with a diversity of forms, shapes and patterns. The ceramics were in slate grey and ocher-colored covers. There were also many precious jewelleries such as beads, earrings, bracelets, etc… made of agate, precious stone or glass. Many iron tools were mainly used for production or as weapons.

The habitation site: The cultural layer of trenches which were twice excavated with a total area of 48m2 was rather deep (1m-1.5m) and stable: the upper layer (from 3rd-4th to 10th-11th century) contained many Champa potteries, ceramics of Liu Chao (six dynasties), Tang dynasty. The lower layer (1st-4th century) contained many crude pieces of potteries from the Sa Huỳnh and ancient Champa period, mouldy gray ceramics, ceramics with square-shaped patterns in the Han dynasty style. There were also many strings of stone and glass beads and a bronze artifact in the shape of a styrax leaf.

The cemetery and habitation sites at Hậu Xá I have supplied lots of valuable information on the funeral custom of Sa Huỳnh inhabitants as well as the cultural development and exchange among Sa Huỳnh – Champa – Han.

The site was inscribed on the Provincial Relics list in 2008.

The excavated artifacts in two cultural layers were stable over the periods with the same stratum.

The first cultural layer: This layer was a gathering place of many Chinese (Tang dynasty), Islamic and Vietnamese ceramics, semi-ceramic tools as well, which dated from the 8th to the 14th century.

The second cultural layer: The rough ceramics of the late Sa Huỳnh – the early Champa period (3rd-4th A.D) were found.

Based on the geographic location and artifact distribution, it is indicated that Trảng Sỏi was a riverside gathering place for trading in the Champa period from the 3rd-4th to the 13th-14th century A.D.

Trảng Sỏi was inscribed on the Provincial Relics list in 2005.

* THE HABITATION SITE OF ĐỒNG NÀ:

Đồng Nà (15o54’17” latitudes North, 108o19’16” longitudes East) is located on the Western bank of the Cổ Cò river, which flows parallel with the seaside in the Northwest – Southeast direction and connected Đại estuary to Hàn estuary. Before the early 19th century, this river played an important role in transportation in Hội An.

The site was discovered and excavated in November 1993, June 1994 with 4 trenches of 18m2 at the low and high lands. The finds inside the trenches which were distributed in the different places and ground levels were similar. The cultural layers were 20-60cm deep and their structures were stable. The finds included lots of ceramic fragments and some pieces of the Champa bricks with producing marks. There were 3 kinds: rough (small quantity), a bit rough and fine – bodied ceramics. The fine – bodied ceramic fragments which were reddish brown or light yellow in covers with rope-shaped, combed or square-shaped patterns following the style of Han dynasty were in the majority. All these ceramics dated from the 1st to the 3rd-4th century A.D. Until now, although there have not been enough evidences to affirm that whether the rough, a bit rough ceramic fragments of the household tools in this site were in the late Sa Huỳnh or the early Champa period, it is more important to recognize a clear transformation of materials, techniques, patterns from the rough into the fine ceramics. In other way, this was an interesting archaeological site relating to the transition stage from Sa Huỳnh to Champa culture.

THE EXHIBITION OF REVOLUTIONARY HISTORY

Introduction to the Museums
(Tiếng Việt)